In an exclusive interview with FRANCE 24, Ghassan Salamé, head of the United Nations Support Mission in Libya (UNSMIL), said he was encouraged by the "conviviality" witnessed at a Libya summit hosted by Italy last week, despite General Khalifa Haftar snubbing the main conference. "Is Haftar interested in the political process? The answer is yes," the UN envoy said.
The Palermo talks were the latest effort by the international community to bring peace and stability to Libya, which has been plagued with fighting between rival factions since the fall of Muammar Gaddafi in 2011.
Haftar, whose forces control all of northeastern Libya, was present in Palermo but snubbed the main conference.
"I am sure he is [willing to negotiate], that is what he told me," said Salamé, adding that he believed Haftar would attend a new conference scheduled for the beginning of next year.
http://www.france24.com/en/taxonomy/emission/18004 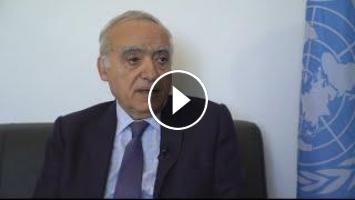