7 Amazing Windmills Around the World

A windmill is a machine that converts the energy of wind into rotational energy by means of vanes called sails or blades. The reason for the name "windmill" is that the devices originally were developed for milling grain for food production; the name stuck when in the course of history, windmill machinery was adapted to supply power for many industrial and agricultural needs other than milling. The majority of modern windmills take the form of wind turbines used to generate electricity, or windpumps used to pump water, either for land drainage or to extract groundwater.

The windwheel of the Greek engineer Heron of Alexandria in the first century AD is the earliest known instance of using a wind-driven wheel to power a machine. Another early example of a wind-driven wheel was the prayer wheel, which was used in ancient Tibet and China since the fourth century. It has been claimed that the Babylonian emperor Hammurabi planned to use wind power for his ambitious irrigation project in the seventeenth century BC.

The first practical windmills had sails that rotated in a horizontal plane, around a vertical axis. According to Ahmad Y. al-Hassan, these panemone windmills were invented in eastern Persia as recorded by the Persian geographer Estakhri in the ninth century. The authenticity of an earlier anecdote of a windmill involving the second caliph Umar (AD 634–644) is questioned on the grounds that it appears in a tenth-century document. Made of six to 12 sails covered in reed matting or cloth material, these windmills were used to grind grain or draw up water, and were quite different from the later European vertical windmills. Windmills were in widespread use across the Middle East and Central Asia, and later spread to China and India from there.

A similar type of horizontal windmill with rectangular blades, used for irrigation, can also be found in thirteenth-century China (during the Jurchen Jin Dynasty in the north), introduced by the travels of Yelü Chucai to Turkestan in 1219.

Horizontal windmills were built, in small numbers, in Europe during the 18th and nineteenth centuries, for example Fowler's Mill at Battersea in London, and Hooper's Mill at Margate in Kent. These early modern examples seem not to have been directly influenced by the horizontal windmills of the Middle and Far East, but to have been independent inventions by engineers influenced by the Industrial Revolution.

Due to a lack of evidence, debate occurs among historians as to whether or not Middle Eastern horizontal windmills triggered the original development of European windmills. In northwestern Europe, the horizontal-axis or vertical windmill (so called due to the plane of the movement of its sails) is believed to date from the last quarter of the twelfth century in the triangle of northern France, eastern England and Flanders.

The earliest certain reference to a windmill in Europe (assumed to have been of the vertical type) dates from 1185, in the former village of Weedley in Yorkshire which was located at the southern tip of the Wold overlooking the Humber estuary. A number of earlier, but less certainly dated, twelfth-century European sources referring to windmills have also been found. These earliest mills were used to grind cereals.

The evidence at present is that the earliest type of European windmill was the post mill, so named because of the large upright post on which the mill's main structure (the "body" or "buck") is balanced. By mounting the body this way, the mill is able to rotate to face the wind direction; an essential requirement for windmills to operate economically in north-western Europe, where wind directions are variable. The body contains all the milling machinery. The first post mills were of the s

7 Amazing Windmills Around the World 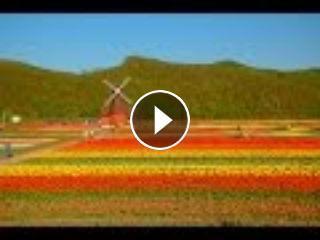