Added 1 year ago by aravindh060
23 Views
And it's not just South Korea that thinks Tokyo's moves are unjustified.
The New York Times reported that Tokyo's recent decision sets a dangerous precedent... and hurts free and open trade.
Kim Ji-yeon reports.
The New York Times criticized Japanese Prime Minister Shinzo Abe for "copying" U.S. President Donald Trump... in citing "national security" as grounds for curbing the export of high-tech materials to South Korea.
The paper reported Monday,... that Tokyo had alluded to "vague" threats to its security... and echoed Seoul's sentiment that the move was politically-motivated.
It also referred to Prime Minister Abe's remarks on free trade delivered last month... before an audience of world leaders at the G20 Summit in Osaka.
There,... Prime Minister Abe called for (quote)"a free and open economy" that serves as a "foundation of global peace and prosperity."
The report then pointed to Prime Minister Abe's contradictory stance... of limiting South Korea's access to Japanese chemicals that are essential to its electronics industry.
It said Japan had joined countries like the U.S. and Russia... in using (quote)"vague, unspecified" concerns as justification for cutting off trade.
Citing experts, the report said such arguments, which have been rarely invoked, are wearing away long-standing global rules intended to keep trade disputes from going out of control.
Once they're weakened,... the national security exception could be used more often, further damaging the world trade order.
The report said more countries like Japan could frequently cite the exception... ever since President Trump started to mix national security into his economic policies in promoting his "America First" initiative.
Kim Ji-yeon, Arirang News. 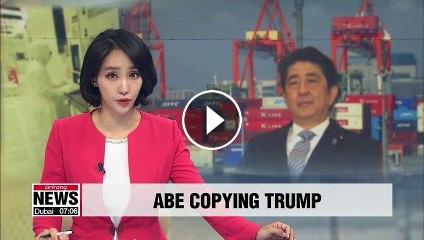