Aksener addresses thousands of supporters at rally in Turkey

Added 2 years ago by sriraj2030
18 Views
(19 Jun 2018) With less than a week to go before voters go to the polls in Turkey's snap parliamentary and presidential elections, presidential candidates have started holding rallies in their would-be strongholds.
Iyi Party's Meral Aksener, a former minister and well-known political figure, held her rally in her hometown of Kocaeli on Tuesday.
Thousands of her supporters attended the rally, waving flags and placards with messages of support for their candidate affectionately known as "Mother Meral".
Aksener, 61, split from Turkey's main nationalist party following a spat with its leader over his support for President Recep Tayyip Erdogan.
Turkey's first female interior minister, she formed the Iyi (Good) Party, which is made up of former nationalists and centre-right figures.
The elections, moved up by more than a year, will usher in an executive presidency for Turkey.
Under the new system of governance abolishing the prime minister's post, the president will be able to appoint ministers, issue decrees, prepare the budget and decide on security policies.
News coverage of the election campaigns has been lopsided in favour of Erdogan, with mainstream television channels broadcasting his daily speeches live.
His opponents have been struggling to have their voices heard.
The pro-Kurdish party's candidate, Selahattin Demirtas is running his election campaign from jail.
The charismatic 45-year-old former co-chairman of the pro-Kurdish Peoples' Democratic Party, or HDP, has been in prison since November 2016 and is fighting terror-related charges.

Aksener addresses thousands of supporters at rally in Turkey 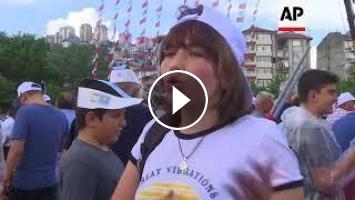 (19 Jun 2018) With less than a week to go before voters go to the polls in Turkey's snap parliamentary and presidential elections, presidential candid...