In the latest episode of Bigg Boss Telugu 3, Punarnavi tells Vithika and Varun that she will nominate Rahul.
Bigg Boss asks Ali, the captain of the house, to name four contestants for nomination. He also gets the power to directly nominate one contestant for eviction.
Ali names Rahul, Vithika, Himaja and Baba Bhaskar. They have to try to convince Ali to evade the nomination.
Baba lists four reasons justifying his stay in the house. Himaja also tries but fails to convince Ali. He alleges Himaja of making provocative comments in Rahul's case. Himaja apologizes to Ali.
Ali requests Baba to be serious about the tasks especially the nomination task.
Siva Jyothi is already nominated for the week and Ali can’t be nominated as he is the captain of the house.
The rest of the housemates participate in the nomination process. The housemates getting a red ball in the box they open, get to nominate in the confession room while the ones getting a black ball, have to nominate in the courtyard by painting the contestants red.
Punarnavi gets a black ball. She nominates Himaja for her argumentative nature. She also nominates Rahul as he doesn’t take the game seriously and give his cent percent during the tasks.
Baba Bhaskar nominates Rahul as he doesn’t take the game seriously and Ashu to make her more participatory in the game.
Ravikrishna nominates Rahul for his lack of participation and Himaja for not being open with everyone.
Vithika gets a red ball. She goes into the confession room and nominates Mahesh as he is very provocative and Ashu as she couldn’t utilise any opportunity to prove herself in the house.
In the confession room, Sreemukhi nominates Rahul as he is loose-tongued and Ashu as she doesn’t take the tasks seriously.
Rahul also gets a red ball. He nominates Himaja as she misinterpreted his behaviour with her. And Sreemukhi because she holds a personal grudge against him.
Ashu nominates Himaja. She questions Himaja about commenting on her chances of survival in the house especially when she is not around. The two argue over the same. Ashu further nominates Rahul as he didn’t help her in the captaincy task and was partial towards Vithika in the task.
Varun nominates Rahul as he gave up too early in the case of Sreemukhi. He nominates Mahesh as well.
In the confession room, Siva Jyothi nominates Punarnavi and Rahul.
Mahesh nominates Rahul and Varun.
Himaja nominates Punarnavi which leads to a heated argument between the two. Punarnavi asks Himaja to change for good and the latter justifies her game. Himaja nominates Ashu and they argue over the same.
Ali exercises his power of nominating someone for eviction and directly nominates Baba Bhaskar. This leaves Baba surprised.
Rahul, Himaja, Mahesh, Ashu, Punarnavi, Baba Bhaskar and Siva Jyothi are the contestants nominated for eviction this week. 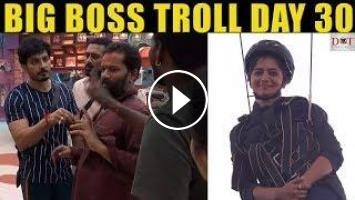