BREAKING She Just Turned On TRUMP, Stabs Him The Back With SICK Admission

Added 2 years ago by aravindh060
19 Views
BREAKING She Just Turned On TRUMP, Stabs Him The Back With SICK Admission

Conservatives around the country are somewhat disheartened to hear that the President signed into law a bill that would increase government spending by an astounding amount. The bill that was pushed through at the last minute, included an increase in budgets for the house and senate in the amount of $1.3 trillion. The Senate increased its total salaries of officers and employees by $12.6 million and increases the Senate budget to $919.9 million, up $48.8 million from the fiscal year 2017, according to the congressional summary of the bill.

Republican representatives voiced their concern with the speed at which this bill was shoved upon them, considering that the lawmakers had less than 48 hours to read the 2,232-page bill before another government shutdown would have been foisted upon America. However, those aren’t the only concerns, the House of Representatives will increase its own budget to $1.2 billion, which is $10.9 million above 2017 levels. Salaries of staffers in the Senate are also set for an increase. Division I of the legislation breaks down the total salaries of officers and employees, which are being raised from $182 million in 2017 to $194.8 million in the final bill, an increase of $12.58 million.

All of this adds up to a disgruntled conservative base who were counting on President Trump to reign in Congress and it’s irresponsible spending. Breitbart News reports that longtime Trump supporter, and former proponent of the Commander-in-Chief, Ann Coulter, was quick to jump on his actions, saying that she believes it will lead to his impeachment:

In a series of online posts, Coulter told Trump he will ‘be impeached’ after signing the spending bill ahead of the 2018 midterm elections where Republican voters are increasingly disappointed with anti-border wall, pro-immigration party leaders like House Speaker Paul Ryan and Senate Majority Leader Mitch McConnell.”

“Despite a reduction overall immigration being one of the most important issues for Republican voters, as Breitbart News reported, Congressional Republicans and the Trump administration have set aside border controls, wage-increasing immigration reductions, and increased interior enforcement of immigration by signing off on the spending bill.

For example, the omnibus bans Trump from funding a new border wall, increases the Catch and Release program for illegal aliens, and does not fund the 1,000 new deportation agents he had previously requested.”

While many conservatives share Coulter’s frustration with the new spending bill, which does seem to spend a lot of taxpayer dollars on things that it seems we could do without, there might be hope yet. As Daily Vine reported when the bill was first signed, just because something unexpected was done, it doesn’t mean that the President’s head is in the sand:

“The President made clear this is not right and was a very bad deal for our country because of all the pet projects Democrats added as a condition to voting for this bill in the Senate. Trump stipulated that he signed it because it’s very important for us to build up our military in a world climate such as what we are living in.

The spending bill does allocate a total sum of $1.6 billion for border measures, much of which is for repairs to already existing fencing which is largely outdated and of questionable efficiency. It explicitly rules out any new prototypes of the kind President Trump viewed this month in Southern California.”

There is still a lot of ground to be covered if the United States is going to get the kind of spending deals we deserve, however, we are only just over one year into a four-year term. While many conservatives consider this to be a breach of promise, with Congress staring down the barrel of another government shut down, we can still hope that this was just a way of buying some time for Republicans to figure out a budget that works, without wasting so many tax dollars.

Do you think the President should have vetoed the bill? Let us know in the comments.

BREAKING She Just Turned On TRUMP, Stabs Him The Back With SICK Admission 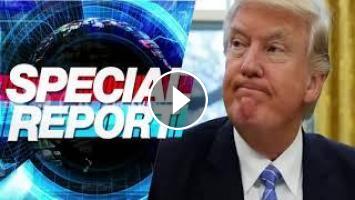 BREAKING She Just Turned On TRUMP, Stabs Him The Back With SICK Admission Conservatives around the country are somewhat disheartened to hear that the ...