China says North Korea issue must be dealt with through dialogue

Added 3 years ago by aravindh060
13 Views
집권2기 첫 전인대 폐막...시진핑,"북핵문제 대화로 해결해야"
China's historic 16-day National People's Congress ended on Tuesday with the country's new "president for life" Xi Jinping giving his closing address.
As well as vowing to "protect every inch" of China, President Xi and his inner circle also addressed the current shift toward diplomacy to solve the North Korea crisis.
Lee Seung-jae reports.
China is set to begin a new era under its newly-empowered President, Xi Jinping.
With the curtain coming down on the National People's Congress on Tuesday,... the country's top officials unveiled their specific targets and priorities for development this year,... while cementing the new state leadership and government.
As the annual session of the ceremonial parliament came to an end,... President Xi struck a strongly nationalistic tone in his closing address,... saying he would never allow "one inch" of Chinese territory to be separated from China.
Addressing nearly three-thousand members of the congress, who had earlier abolished term limits on Xi's rule,... President Xi referred to self-governing Taiwan,... adding that he will continue to reach out to advance the cause of "peaceful unification".
Chinese Premier Li Keqiang, who was handed a second five-year term during the congress,... said the North Korean nuclear issue must be dealt with through dialogue.
Li said China would do its utmost to promote the denuclearization of the Korean peninsula,... and maintain peace and stability in Korea.
He added there was a high degree of concern on the matter in China,... as it's geographically very close to the peninsula.
With China's roadmap set for now,... many watchers wonder how the 'new era' of China under Xi Jinping rule will effect not just China,... but the Korean peninsula and the world.
Lee Seung-jae, Arirang News.

China says North Korea issue must be dealt with through dialogue 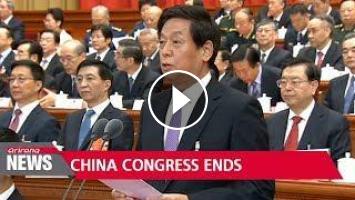