Added 1 year ago by aravindh060
7 Views
Stephen Miller had a rough time on Chris Wallace’s show. Cenk Uygur and Ana Kasparian, hosts of The Young Turks, break it down. MORE TYT: https://tyt.com/trial

"White House adviser Stephen Miller on Sunday pushed back against those who believe President Donald Trump is a racist or is engaging in racist rhetoric, arguing the liberals use that label to censor their opponents.

"Fox News Sunday" host Chris Wallace listed several of Trump's statements that have been decried as racist, including his recent suggestion that four congresswomen of color "go back and help fix the totally broken and crime-infested places from which they came," his unsubstantiated claims that former President Barack Obama was not a U.S. citizen, his campaign announcement in which he said Mexicans "are rapists," his call for a "complete shutdown on Muslims entering the United States," and his assertion that there were good people on "both sides" of a clash between white nationalists and counterprotesters at the "Unite the Right" rally in Charlottesville, Virginia."

Download audio and video of the full two-hour show on-demand + the members-only postgame show by becoming a member at http://tyt.com/join/. Your membership supports the day to day operations and is vital for our continued success and growth. 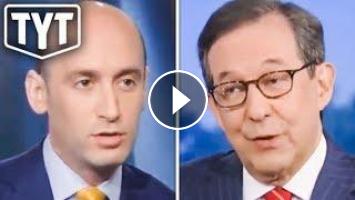 Stephen Miller had a rough time on Chris Wallace’s show. Cenk Uygur and Ana Kasparian, hosts of The Young Turks, break it down. MORE TYT: https://tyt....