Added 2 years ago by aravindh060
33 Views
Thanks for watching....
Azufral
https://en.wikipedia.org/wiki/Azufral

Subduction zones are places where two plates, usually an oceanic plate and a continental plate, collide. In this case, the oceanic plate subducts, or submerges under the continental plate forming a deep ocean trench just offshore. In a process called flux melting, water released from the subducting plate lowers the melting temperature of the overlying mantle wedge, creating magma. This magma tends to be very viscous due to its high silica content, s 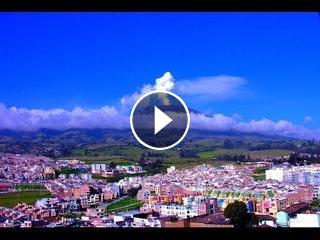