After a series of rollout delays, Nicki Minaj dropped her long-anticipated fourth album, Queen, on Friday. Paired with a track-by-track commentary broadcast on Apple’s Beats 1 Radio and a hefty social media campaign (bolstered by her ever-enthusiastic army of Barbz), Nicki and her team did everything in their power to make the album release feel like an event.

Nothing, though, will likely be as successful at driving immediate interest as the third song on the album, “Barbie Dreams.” “Reading the reactions to Barbie Dreams is fucking hilarious,” Nicki said as soon as the song was released. “Everyone is saying how disrespectful ‘Barbie Dreams’ is, and that’s why I fucking love it.” 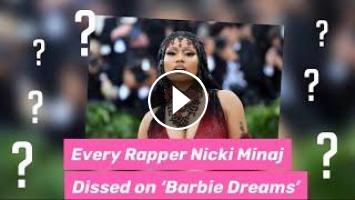 Every Rapper Nicki Minaj Dissed on ‘Barbie Dreams’ Nicki Minaj takes aim at the whole game on her new ‘Queen’ track After a series of rollout delays, ...