Added 2 years ago by vijaykumar322705
24 Views
Ezra Miller plays the character Credence Barebone in J.K. Rowling's Fantastic Beasts and Where To Find Them. The film is set in the year 1926, and Newt Scamander (Eddie Redmayne) has just completed a global excursion to find and document an extraordinary array of magical creatures. Arriving in New York for a brief stopover, he might have come and gone without incident, were it not for a No-Maj (American for Muggle) named Jacob, a misplaced magical case, and the escape of some of Newt's fantastic beasts, which could spell trouble for both the wizarding and No-Maj worlds.

Make Your Day Magic with the UK's favourite radio station for More Music. We keep the UK in a good mood whenever and wherever they listen by playing the best tracks from Elton John, Stevie Wonder, Ed Sheeran, Aretha Franklin, Whitney Houston, Take That, Motown and more.

Tune in on 105.4FM in London and across the UK on DAB Digital Radio, Freeview, Sky, Virgin Media, online at Magic.co.uk, and with our App for iPhone, iPad and Android. 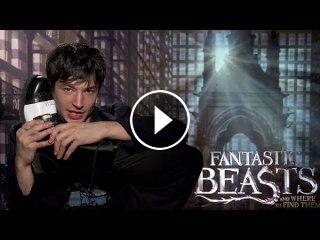 Ezra Miller plays the character Credence Barebone in J.K. Rowling's Fantastic Beasts and Where To Find Them. The film is set in the year 1926, and New...