From insurgency to incumbency, Trump has more "shaking up to do" as he sets out to win 2nd term

Added 1 year ago by aravindh060
15 Views
U.S. President Donald Trump is formally launching his bid for re-election in 2020 with a huge rally in Orlando, Florida.
He's no longer the dark horse candidate that few people thought would win in 2016,... but there's little doubt the love him-or-hate him president has a few challenges to overcome.
That said, Trump being Trump,... he's sure to have some aces up his sleeve in the months to come.
Oh Soo-young has more.
He promised a break from traditional politics,... and in his second run for America's top office,... U.S. President Donald Trump is once again pitching himself as the face of change.

"He still is the guy who is shaking up everything and you can see that almost every day when he does tweets, launches new policies and tariffs and tensions with Mexico and Iran and so on, he is still to some extent, a disrupter."

Trump's strongest case for reelection is likely to be the robust U.S. economy,... with more Americans than ever before upbeat about employment and wages.

"Trump made this appeal to working class people and his actions with respect to Mexico and China with respect to tariffs. I think it does appeal to a lot of people in those grounds states like Michigan, Ohio, Wisconsin as well as Pennsylvania. Another area that really appeals to the base is immigration, of course. So he's taken very strong stance on that issue, pressured Mexico."

But whether he's "Made America Great Again," is debatable.
Despite strong support from small dollar donors,.. polls indicate the greater public are not convinced.
Trump has the lowest approval average in U.S. presidential history, averaging 40 percent.

"Markets are beginning to realize that you can't exactly bank on what President Trump says. I think a lot of Americans are sort of sick and tired of the ongoing chaos that is Trump's presidency."

Domestic concerns such as climate change,... access to health care,... and abortion rights,... are likely to be chinks in the armor for the Republican candidate,... who has largely disregarded these issues.
His party's internal polling shows he is currently lagged behind the Democrat's frotrunner, former Vice President Joe Biden in key battleground states.
However,... some say a foreign policy victory could swing voters in his favor.

"He could pull off his own October surprise and have Halloween agreement with Kim Jong Un. I think Kim knows that his best shot is Trump to have second term, and he would rather get the substances of the deal that can be built upon,rather than roll the dice and just cross his fingers at what might happen in 2022."

The insurgent candidate in 2016,... and now running as the incumbent,... he may now be the establishment but it's clear President Trump has more shaking up to do in the months to come.
Oh Soo-young, Arirang News.

From insurgency to incumbency, Trump has more "shaking up to do" as he sets out to win 2nd term 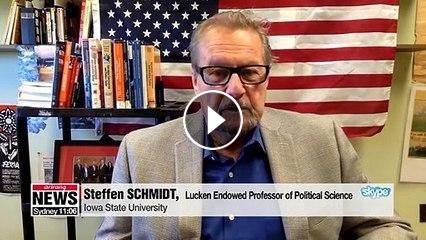 U.S. President Donald Trump is formally launching his bid for re-election in 2020 with a huge rally in Orlando, Florida.He's no longer the dark horse ...