CMD Radhey Shyam, accused of cheating of thousands of crores in the Future Maker company case, did not get relief from the district court. The Court of CJM Fund Bansal dismissed the bail plea filed by the court. At the same time, his lawyer had petitioned for the bail of Arpi National Distributor Sunder, but Vidarra even before it was debated. At present, both accused are lodged in Telangana's Chelyallipali jail.
Let the accused prosecutor argue in court that this company is a product selling base company. GST also fills and is framed by mischief in the name of chit fund. Against this, the government lawyer has given his side according to the facts of the police file.

In police inquiries have revealed that the target of the CMD Radheshyam accused was to reach the house to the house and more and more people had to connect with it. For this, the company did a variety of promotion programs.
Agents were given a rough commission, trapped in the dizziness, they used to add people ahead of it. The team of SIT has gone to Nashik with the two accused, only after coming back from there will know about further action.

Without our written Permission You Can't Use any full or part Video Affects, Even You Can't Copy Data.

Cyberabad,
CMD Radhey Shyam of Future Maker Company has granted bail in both cases, while the third case raised by the police has been rejected by the Telangana High Court. Sirsa Police's SIT has brought relief to the Future Maker, even the Future Maker company is not considered to be considered for a chitfund category. The cyberabad court has given bail to Radhey Shyam, who has commented that the police misused their rights to file a case against the CMD of the company.

On the other hand, not being considered by the SIT of the Sirsa Police in the category of Chintfund, it is also a relief news for the company and the investors. Now after the SIT 8 days of Sirsa Police Police remand, Radhey Shyam will be presented to the court in Fatehabad court on Thursday. The court will give its verdict, the police will take action under it, and according to the court's directions on the conditional bail granted in the main FIR number 710 recorded in the FIR filed in Cyberabad police station in Telangana this week, Radhey Shyam will have to go to Cyberabad to join the police investigation 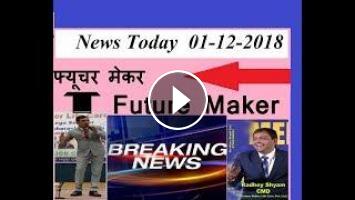