He's a Victim, Too: Speaking Out on Male Sexual Exploitation-Haley Halverson

Added 2 years ago by aravindh060
5 Views
Haley Halverson addresses the lack of recognition and resources for male survivors of sexual abuse or harm, and the necessity of addressing the full spectrum of male sexual exploitation.

This event was part of the national symposium, Out Of The Shadows: Addressing the Sexual Exploitation of Boys and Men. The event was hosted by the National Center on Sexual Exploitation, Washington College, and The U.S. Institute Against Human Trafficking. Learn more at http://endsexualexploitation.org/boysandmen/

For too long, male sexual exploitation victims have been overlooked. The media, politicians, and society at large have all failed to adequately address the experiences of boys and men involving sex trafficking, prostitution, child sexual abuse, sexual objectification, or early childhood exposure to pornography. As a result, countless men and boys suffer in silence without receiving the appropriate services for recovery.

Haley Halverson joined the National Center on Sexual Exploitation (NCOSE) as Director of Communications in May of 2015. Haley cares deeply about human rights and the issue of sexual exploitation, particularly regarding those exploited in the sex industry. In her role, Haley acts as a spokesperson for NCOSE and oversees strategic messaging development, press outreach, email marketing, and social media marketing. She is also the host of the “Sexploitation?” podcast, and is currently pursuing a Master of Arts at Johns Hopkins University.

He's a Victim, Too: Speaking Out on Male Sexual Exploitation-Haley Halverson 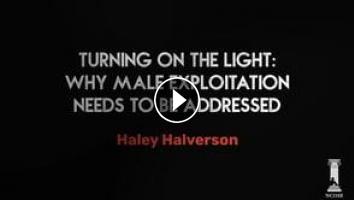 Haley Halverson addresses the lack of recognition and resources for male survivors of sexual abuse or harm, and the necessity of addressing the full s...