In-Flight - A New Perspective On Air-Travel

Added 2 years ago by aravindh060
44 Views
I`have always felt that air-travel is a very misunderstood subject. People think of it as spending a few hours in a cabin to go somewhere, but what they fail to understand is that to most people, those "few hours» is the time they have to explore the sky.

Making a film about aviation is something I`ve wanted to do for a very long time. I remember clearly my fascination for aircrafts and flying as a child, now I am a student -pilot, so if there was ever going to be a time to make a film about aviation, it would be now. As a student pilot you have more easily access to the cockpit, than a normal passenger, so after a few flights in the jump-seat I began to see the potential for making a film where I would introduce the ordinance to the cockpit.

Whenever I thought of the project that would become «In-Flight», I realized that it would have to be a very spontaneous project in that I would not be able to plan to much in advance. I could not know whether I would be allowed to sit in the cockpit or not before the same day I went somewhere. However what I did workout in the planning stage was what angles and moments I would try to capture If I got to sit in the cockpit. I saw instantly that in order to get shots with the greatest variety, I would had to be prepared to stretch the project to a year. In other words, «In-Flight» would become the longest running production we had ever done.


I started the shoot in august 2014 on a flight from Oslo, Norway to Tunisia onboard an Airbus a320. It was the first time I was allowed to sit in the cockpit for filming purposes. Ironically none of the cockpit material i captured that day ended up in the finished film.

When traveling back from Tunisia, my request to sit in the cockpit was declined and I had to sit back in the cabin with the other passengers. Throughout that flight I noticed that most people had no interest in where they where. They didn`t seem to care that they where traveling thousands of meters above the ground. Then it struck me that that very observation, had to be the whole meaning of the film. My film had to inspire those people to care more for there surroundings while in an aircraft.

Air-travel is the only way for mankind to explore the sky, so for me, «In-Flight» had to show the parts of the experience of air-travel most people dont see. I learned from this that showcasing the events that takes place during one flight would be essential, rather than showing sevral flights with no connection.

Moving on, my next flight went from Oslo to Riga. I was kindly allowed in to the cockpit of a Boeing 737 after showing my student id. That flight gave me a lot of nice perspectives. It became very clear to me that the footage would be very hard to beat and should be the basis of the film. After arriving in Riga I would go through all the footage and try to pin-point what type of angles and/or moments I would try to get if I got to sit in the cockpit on the way back.

On the way back I was allowed to sit in the cockpit on another 737 and I focused on getting small elements that I was`t able to get on the way down. I captured the movement of yokes and throttles. There was also quite cloudy conditions when arriving in Oslo, so I was able to get some quite nice cloud footage when the aircraft was cloud-surfing. Later on I found out that my school had 737 Simulator in it. I used this for some close up shots of instruments and buttons I was not able to get in the real 737 cockpit.

The cockpit is a very difficult environment to film in. The cockpit is relatively dark, but through the glass comes bright shining lights. If you expose correctly on the inside of the cockpit, you will not be able to see anything out the window in the cockpit. It would simply be overexposed. It sounds obvious, but the trick that i learned after a few flights was to expose somewhere in between the bright light and the dark shadows. I would expose more correctly accordingly to the bright light than the dark shadows. The reason for this is that I was more capable of retrieving details from the shadows than the overexposed areas. In post-editing I would bring down the highlights and up with the shadows. Bringing up the shadows introduces noise, something I had to be careful with. I shot the sequences using my 5D mkII with the magic lantern and three GoPro Hero 3+.

"In-Flight" is a film where I took every opportunity I was afforded with and even went for those I did not get. I hope other people find «In flight» to lend a new perspective on Air-Travel.

In-Flight - A New Perspective On Air-Travel 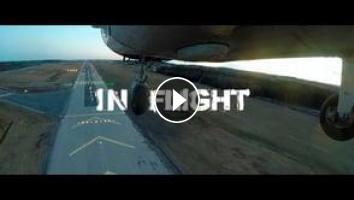 I`have always felt that air-travel is a very misunderstood subject. People think of it as spending a few hours in a cabin to go somewhere, but what th...