Added 1 year ago by vijaykumar322705
23 Views
Richard Baldwin is a world-renowned expert on global trade and economics who currently works for various organizations, including the OECD and the World Bank.
He was also an economic advisor to former U.S. President George H.W. Bush.
We wanted to get his take on the big economic issues of the day,... and since he's in South Korea for the annual Jeju Forum,... our business correspondent Kim Hyesung managed to grab a few minutes with him to hear his thoughts on globalization and trade.
Let's take a look.

1.You said future globalization will be totally different. What exactly is globalization 4.0, a term you presented at the Davos Forum and here at Jeju Forum?

Up to now, globalization has mostly been companies taking advantage of price differences in goods. But the really large price differences are in the world that exists today is in salaries of professionals and service sector workers.
Now up to now people couldn't take advantage of those differences because of the high cost to face to face. But digital technology is changing that reality and making it possible for people to essentially telecommute internationally....We'll have a big wave of service sector globalization.

2.
What about South Korean companies, how can they take advantage of globalization 4.0?

The big famous South Korean companies are in manufacturing. And that's OK. But probably they'll be able to take advantage of lower cost service provisions doing it. But look what I'm actually looking at is lots of new companies.
One of my analogies that I like is Ebay or Alibaba. These were brand new companies that broke the business model, online retailing. And I'm thinking there will be lots of companies that rise providing services overseas organizing domestically.

3.
Professor we talk about globalization 4.0. But ironically we're seeing a rise in protectionism across the world in recent years with the U.S.-China trade war, and the trade spat between South Korea and Japan, What's your assessment of this risk?

Well that is very serious.
I mean I think what I think the major dominant thing right now is the U.S. is more or less declared trade war on everybody the U.S.,Canada, Mexico, EU, Japan, Korea, Australia, everybody, India now recently and people are starting to protect back. So that's somewhat disruptive.But on the other hand many of these countries are starting to liberalize trade among themselves. And more deeply, I think that our economies are so deeply knit that we'll find a way to make it work.

You diversify your markets, you diversify your sources...that's a little too late now.
I think the the legal recourse to the WTO is is the obvious thing to do. But of course many of these things involve diplomacy deep down.
I think maybe in a different world the U.S. would have stepped in to prevent them from fighting. But this current administratio 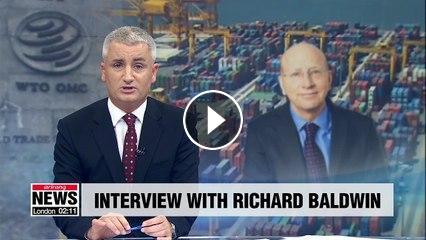 Richard Baldwin is a world-renowned expert on global trade and economics who currently works for various organizations, including the OECD and the Wor...