Added 2 years ago by aravindh060
36 Views
Jim Carrey is not a fan of Sarah Huckabee Sanders. Cenk Uygur, host of The Young Turks, breaks it down. Tell us what you think in the comment section below.

"Did you know Jim Carrey is a prolific artist? You probably do if you follow him on Twitter; it's most of what he shares on the social network. While a lot of his stuff used to be just plain weird (just like his old website! Remember his old website? It was great), these days the work he shares publicly is extremely political. Like a lot of us, he's pretty pissed about the state of the American government, and isn't shy about telling you.
While his art isn't always all that coherent or explicit (Carrey himself isn't always that coherent), his latest work is almost certainly of White House press secretary Sarah Huckabee Sanders. And it doesn't look great! Probably on purpose!" 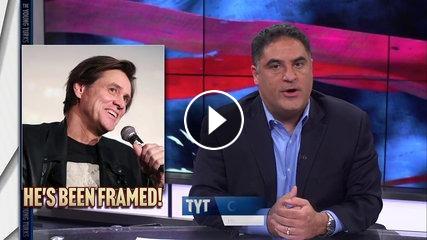 Jim Carrey is not a fan of Sarah Huckabee Sanders. Cenk Uygur, host of The Young Turks, breaks it down. Tell us what you think in the comment section ...