"MeToo" movement in S. Korea discussed on one year anniversary of start of movement

Today marks one year since a female prosecutor publicly accused a powerful senior official of sexually harassing her, triggering the "MeToo" movement in Korea.
To commemorate the anniversary, a discussion on gender issues and sex crimes was held at the National Assembly.
Yoon Jung-min has the full story.
To commemorate the one year anniversary of the "MeToo" movement in Korean society, a round-table talk was held at the National Assembly on Tuesday to discuss how society has changed and where to go next.
Lawmakers and figures from culture, sports and other fields attended,... including female prosecutor Seo Ji-hyun, whose revelations of sexual harassment by a senior official at the Justice Ministry triggered the "MeToo" movement in the country last January.
"I believe sexual crimes are not a personal issue, but a collective issue. And it's a sort of a holocaust committed on women and the weak. The "MeToo" movement is not about something special. It's about declaring that we wouldn't stay silent anymore, and that we urge society to punish perpetrators properly and protect victims properly."
Tuesday marks one year since Seo raised accusations against senior offical Ahn Tae-geun in front of the media. Last week, Ahn was sentenced to two years in prison.
The accusation last year sent a shockwave through Korean society, spreading from politics, to culture, education and sports,... with a series of allegations following throughout the year.
A political heavyweight stepped down, and a renowned filmmaker and a famous poet were also disgraced due to these accusations.
Recently, several former and current elite sports coaches were accused of similar acts.
Such a move did bring some change. Punishments became stricter and more laws were passed, but the panels said the mindset of the public needs to change,... and pointed out that society is still too lenient on the perpetrators and neglects the victims.
"The public tends to focus more on the victims rather than the perpetrators. Also, there's the possibility of revenge, like a criminal ring. We try to hear voices from victims but sometimes that's not easy. We hope the government will do more to help them."
"The MeToo movement has unleashed a greater discussion of gender issues in Korean society over the past year. The roundtable talks aim to bring a better, healthier society, free from the kinds of violations that came to light during the movement.
Yoon Jung-min, Arirang News."

"MeToo" movement in S. Korea discussed on one year anniversary of start of movement 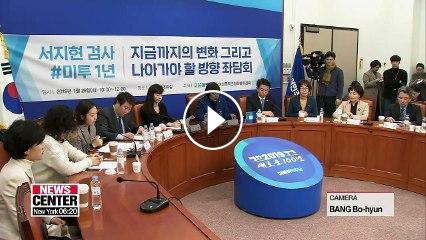