Added 2 years ago by aravindh060
25 Views
North Korea has cast further doubt over whether next month's landmark denuclearisation meeting with the US will go ahead.In a statement eerily reminiscent of the aggressive rhetoric used during last year's nuclear tests, the North's chief negotiator Ri Son Gwon condemned the South as 'incompetent and senseless' over its decision to press ahead with large scale US-led military drills. Ri made it clear that the nation would be unwilling to sit down either with the South or with the US at Singapore if there was no change in position over the combat drills.  The news comes as a high-level meeting between North and South Korea was suspended on Tuesday as it was announced the annual 'Max Thunder' exercises would go ahead as planned. Scroll down for video  North Korea's chief negotiator Ri Son Gwon (left) shakes hands with South Korean counterpart Cho Myoung-gyon at their meeting in January Kim Jong-un (pictured) is set to meet Donald Trump at a historic summit in Singapore on June 12 next month Kim Jong-un meeting with South Korean President Moon Jae-in as the pair held pivotal talks in the DMZ in January RELATED ARTICLES Previous 1 2 Next Trump says he won't back down on denuclearization despite... Is Kim Jong-un really dismantling his nuclear test site...... Kim-Trump summit on the brink: North Korea says it will NOT... Share this article Share Ri also criticised the South Korean authorities for allowing 'human scum' (a reference to a North Korean defector) to speak at the Seoul National Assembly.  It later released a statement saying it might pull out of the summit with the US if the Trump administration insisted it gave up its nuclear weapons unilaterally.The highly anticipated meeting between Mr Trump and Mr Kim is due to take place in Singapore on 12 June.The current US-South Korean aerial combat drills known as Max Thunder involve nearly 100 warplanes carrying out exercises over the Korean peninsula.North Korea described them as a 'provocation' and a rehearsal for an invasion. South Korea's Foreign Minister Kang Kyung-wha told MPs on Thursday there was a gap between North Korea and the US on 'how to pull off denuclearisation', according to South Korea's Yonhap news agency.North Korea said last week it would begin dismantling its nuclear test site at Punggye-ri between 23-25 May, but there was no mention of allowing foreign experts access to the site.On a recent visit to North Korea, US Secretary of State Mike Pompeo stressed that any claim of denuclearisation by the North would require a 'robust verification' programme by the US and other nations. US troops taking part in joint exercises with the South Korean military on 12 April 2018 amid warnings from the North Large-scale drills held in tandem with South Korean forces known as 'Max Thunder' take place annually President Trump has previously thanked Kim Jong-un for releasing a number of US prisoners (pictured) but next month's Singapore summit now looks in doubtThe insults Donald Trump and Kim Jong-un have hurled at each other: President Donald Trump accepting an offer to meet with North Korean leader Kim Jong-un is a stunning turn of events after a year of heated verbal warfare that included crude insults and mutual threats of nuclear attacks.While the move to hold a summit appears to be an effort to ease decades of animosity between the US and North Korea, it comes after months of the two leaders trading insults and Trump threatening to 'totally destroy' the country.From Trump calling Kim a 'rocket man' and 'short and fat' to the US President being labeled 'mentally deranged' there has been no shortage of nasty insults between the leaders.So ahead of the summit - for which a time and place is yet to be determined - here is a look at some of the more notable war of words between Trump and Kim so far. Short and fat:Back in November last year, Trump hurled an insult at Kim during a trip to Vietnam calling him 'short and fat'.'Why would Kim Jong-un insult me by calling me 'old,' when I would NEVER call him 'short and fat?' Oh well, I try so hard to be his friend - and maybe someday that will happen!' he tweeted.He was retaliating after North Korean media had labeled Trump as an 'old lunatic'. Rocket Man:During his address to the UN General Assembly back in September, Trump said the US would 'totally destroy North Korea' if forced to defend itself or its allies.He also referred to Kim as 'Rocket Man' during his speech.'The United States has great strength and patience, but if it is forced to defend itself or its allies, we will have no choice but to totally destroy North Korea,' Trump said.'Rocket man is on a suicide mission for himself and for his regime.' Mentally deranged:Kim hit back to the Rocket Man comments accusing Trump of 'mentally deranged behavior.'He said he would 'surely and definitely tame the mentally deranged US dotard with fire'.Trump responded on Twitter the following morning: 'Kim Jong Un of North Korea, who is obv 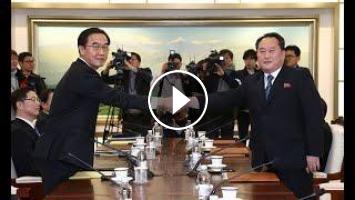 North Korea has cast further doubt over whether next month's landmark denuclearisation meeting with the US will go ahead.In a statement eerily reminis...