Raef - You Are The One | Official Music Video

Added 3 years ago by admin
42 Views
The official music video for Raef's song "You Are The One" from his debut album "The Path" Available now!
Download, listen and/or buy the album CD here:
http://www.awakening.org/raefmusic/thepath/

Born in Washington DC and raised in Maryland, Raef has shared his music with faith-based communities across the world. In the early 2000s, he sang tenor in a college a cappella group and played his acoustic guitar at local coffee shops. Raef was introduced to the national stage after his trio rock-band "Great Seneca" toured the United States as part of the "Voices for Change" initiative. Shortly afterwards, Raef joined the "Poetic Vision Tour" - a band of traveling musicians and poets dedicated to inspiring a spiritual and cultural renewal. More recently, Raef started working with Awakening Records and in 2014 released his debut album "The Path" , a collection of songs that reflects his identity as an American Muslim and his journey throughout the years.

You Are The One:

I thought of this before over a million times
Who would've ever thought that it would be our time?
I just know it, 'cause you're the one
It ain't a selfish love, when I'm with you
You remind me of Allah, and so I know it's true
I'll just say it: you are the one

Chorus:
Won't you be my BFF (best friend forever) and ever?
Won't you be my partner after this world?
We'll see it, when we believe it together
Dreams are meant to be, 'cause you're the one for me

I never thought that I would ever feel this way
I ask Allah to bless you every single day
I'll just say it, 'cause you're the one
And when times are tough, and we've got the world to see
Standing right beside you is where I want to be
I just know it: you are the one

I prayed about this just over a million times
Who would ever thought that I could call you mine?
I just know it, 'cause you're the one
And when there's gray in our hair and we've not much to do
I want to spend the rest of my days with you...
Oh don't you know it?
You are the one, you are the one
Oh won't you be the one?

Raef - You Are The One | Official Music Video
© 2014 Awakening Records

Awakening Records is a subsidiary of the UK-based Awakening Worldwide that has operational offices in both United States of America (USA) and Egypt.

Raef - You Are The One | Official Music Video 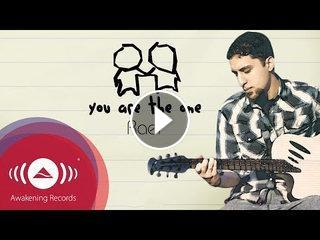 The official music video for Raef's song "You Are The One" from his debut album "The Path" Available now!Download, listen and/or b...