Added 2 years ago by aravindh060
5 Views
July 10, 2018 | Bob Boilen -- The horns burst, the voices wail and, as if about to launch into a sermon, this author, activist, intellectual, pastor and singer introduces himself: "My name is Rev. Sekou and these are the Seal Breakers, now they from Brooklyn." He points to his band and continues, "but I was raised in in a little old place called Zent, Arkansas that's got about 11 houses and 35 people, and they'd work from can't-see morning to can't-see night and then they'd make their way to the juke joint. And then early Sunday morning they'd make their way to the church house." As he stokes up the NPR crowd, mixing church preaching with juke-joint jiving, he adds, "there's a lot of trouble in the land, but we've got one question for you: Do you want to get free? Say Yeah!"

And then Rev. Osagyefo Uhuru Sekou tosses off his large-brimmed, black hat, shakes his dreadlocks and demands freedom with these words: "We want freedom and we want it now!"

"Resist," is just the opener to one of the most rousing Tiny Desk Concerts I've seen. During this 20-minute set Rev. Sekou took us all through an even wider range of emotions as he recalled the horrors of the white nationalist march in Charlottesville, Va. last summer. He said he spent weeks in preparation, organizing clergy for what he says was "the largest gathering of white supremacists in modern history," then watching the activist "Heather Heyer take her last breath" after she was struck by a car that plowed into a crowd of marchers. The song "Bury Me" is a bluesy anthem to freedom that honors those who have died in that struggle for racial equality and freedom. In his free-form preamble to the touching ballad, Rev. Sekou works himself into a passionate frenzy, before airing his intense indignation for President Trump.

I saw Rev. Sekou perform in Austin during this year's South by Southwest music festival. I believe him when he tells the NPR crowd "I'm Pentecostal, we can go on for two or three hours!" His call to action is fervent and wholehearted, steeped in history with hopes for brighter days. 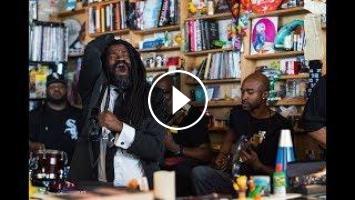