Added 1 year ago by aravindh060
6 Views
문 대통령 "6월1일 남북 고위급 회담, 이어 군사회담, 이산상봉 위한 적십자회담 합의"
The leaders of the two Koreas also agreed on bringing back that warmed ties between the two,... again,... renewing the focus on fulfilling the commitments made in the Panmunjom Declaration which called for, among other things, lowering tensions and bringing together families separated by the Korean War.
Cha Sang-mi reports.
A month after President Moon Jae-in and North Korean leader Kim Jong-un signed the April 27th Panmunjom Declaration at their first historic summit, the declaration has been given a new impetus.
At their surprise summit Saturday at the Demilitarized Zone, the leaders of the two Koreas discussed joint follow-up efforts to come.

"We reaffirmed that we will promptly fulfill the April 27th Panmunjom Declaration.
We agreed to hold, in succession, high-level inter-Korean talks on June 1st, then military talks, and an inter-Korean Red Cross meeting for the reunion of separated families."

According to the Declaration, military talks are to alleviate "acute military tensions" and "eliminate the danger of war" on the Korean Peninsula.
The Inter-Korean Red Cross Meeting is to ensure that reunions for separated families are scheduled for National Liberation Day on August 15th this year.

Stressing on the significance of the promptness and informality of the latest meeting, President Moon said both sides were ready to talk on the phone or meet anytime they need to.
President Moon added that he had for a long time pushed for regular meetings between the leadership of the two sides to resolve conflict and tensions, and that his desire to do so is reflected in the Panmunjom Declaration.
Looking back on some important progress made already, he said the Winter Olympics held this year in Pyeongchang became a Peace Olympics, and that a new path to peace and prosperity was created at the summits in Panmunjom, a site that had been a symbol of tension and confrontation.

"President Moon says the direction of history is now changing. If the declaration of April 27th is fulfilled, then ordinary Koreans might no longer need to live with a deeply rooted, constant fear of conflict.
Cha Sang-mi, Arirang News." 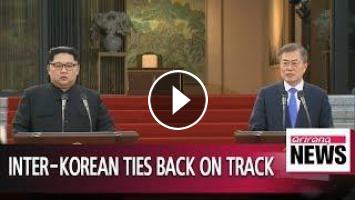