Syrian Air Base Attacked by Missiles

"Syrian state-run news agency SANA on April 9 said the attack was on the military airfield near the city of Homs in the early hours of April 9. SANA initially said the attack on the Tayfur base was a "suspected U.S. attack," but it later withdrew any reference to the United States.

The Pentagon issued a statement saying that "at this time, the Department of Defense is not conducting air strikes in Syria."

"However, we continue to closely watch the situation and support the ongoing diplomatic efforts to hold those who use chemical weapons, in Syria and otherwise, accountable," it added.

The Syrian media claimed that the country's air-defense crews had shot down eight attacking missiles." https://www.rferl.org/a/syria-missile-strike-homs-us-denies-involvement/29153696.html

Syrian Air Base Attacked by Missiles 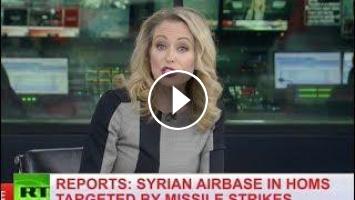