Added 3 years ago by sriraj2030
19 Views
i’ve been recording and editing voices for as long as i can remember: my own, people i know, and strangers. so many strangers...

on ‘that third thing’, i arranged a mix of familiar & new voices to create a cast that would narrate the project, introduce changes, and interact with me. it's hard to pinpoint when i started collecting those elements but the result was a treasure chest. i sliced hours of dialogue from interviews i conducted, rearranged pieces of monologues & news broadcasts, and stitched together clips from television shows & films. then sometime in the middle of that process, a mentor introduced me to the art of sound design. the possibilities were infinite, and manipulating all those layers called for meticulous attention to detail.

jefferson jackson, the sole producer on 'that third thing', weighed in on most of the arrangements, but ultimately it was through the process of trial & error - for months on end - that i finally aligned and alternated the voices that help tell these stories.

on the opening track, before i speak, three other voices establish the motif of the ride ahead. the last voice on the song reveals the origin of the album title:

"in music, one and one makes three. if it makes two, you fail, my friends.. if you're painting and all you've got is paint and a canvas, you fail. you've got to find that third thing that you don't completely understand, but that is truly coming up from inside of you."
- bruce springsteen. 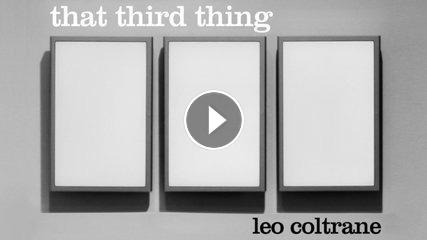 i’ve been recording and editing voices for as long as i can remember: my own, people i know, and strangers. so many strangers... on ‘that third thing’...