The open society and its enemies in South Korea | LIVE STREAM

Added 1 year ago by vijaykumar322705
8 Views
The North Korean nuclear crisis and the US–Republic of Korea (ROK) military alliance dominate international coverage of the Korean Peninsula, but what about South Korea itself? South Korean President Moon Jae-in’s administration has reportedly clamped down on media outlets, restricted freedom of speech, and encouraged partisanship in the judiciary and civil service.
Is the ROK government on a path to limit freedoms in the South? Or is this all just politics as usual in a democracy with different rules from our own? Please join AEI for a discussion on the domestic politics of South Korea and their implications for the ROK, the US, and North Korea.

Watch other videos about "Topic"

The use of third-party photos, graphics, video clips, and/or music in this video does not constitute an endorsement from the artists and producers licensing those materials.

AEI operates independently of any political party and does not take institutional positions on any issues. AEI scholars, fellows, and their guests frequently take positions on policy and other issues. When they do, they speak for themselves and not for AEI or its trustees or other scholars or employees.

The open society and its enemies in South Korea | LIVE STREAM 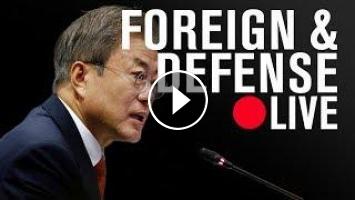 The North Korean nuclear crisis and the US–Republic of Korea (ROK) military alliance dominate international coverage of the Korean Peninsula, but what...