Added 2 years ago by aravindh060
9 Views
And just as we on the right were thinking we couldn’t do worse than John McCain as a U.S. Senator, along comes this little bit of news that proves us wrong.

After today’s news broke that Arizonans might be close to having to say goodbye to Senator John McCain, Republicans and the usual political pundits in the state and the nation have begun to speculate as to who will be replacing him when he can no longer serve. And the speculation that’s truly the most frightening to any real Republican is, McCain’s own wife, Cindy McCain, who has no experience whatsoever in politics other than being the rich wife of a senator who would betray his own party and voters every chance he got.

Here is more on this breaking news story via Vox:

“Cindy, who has been married to McCain since 1980, has never held political office, but she has a long history in the national spotlight after her husband’s two presidential campaigns and has a record of international humanitarian work. She was rumored last year to be under consideration for a role at the State Department. Appointing a politically engaged widow to replace their spouse is relatively common — there’s even a political science term for it: “widow’s succession,” as the Washington Post’s Christopher Ingraham wrote a couple of years ago.

Kyl represented Arizona in the Senate for 18 years, eventually rising to the No. 2 Republican post. He stepped down in 2013 and has since become a lobbyist. He had a reputation while in the Senate as one of the most conservative lawmakers in the chamber, though his party has continually moved to the right since he was first elected.

Ducey, the Arizona governor, has refused to make any public comments about whom he might appoint to replace McCain, and the Post reported that he has dismissed the idea that he might appoint himself. Former Arizona Rep. John Shadegg and Ducey’s chief of staff Kirk Adams are some other names that have surfaced during this somewhat distasteful parlor game.

According to the Post, citing Arizona election officials, if McCain leaves his seat before May 30, there would be a special election this year to replace him. The primary would be held in August and a general election in November.

And the reality is that Arizona would give Democrats some of their best chances to pick up seats in their unlikely bid to retake the Senate. Flake is retiring, with a contentious GOP primary taking shape to replace him. Establishment favorite Martha McSally is facing conservative firebrand and Breitbart favorite Kelli Ward, while anti-immigration hawk Sheriff Joe Arpaio, the recipient of a Trump pardon, has also thrown his hat into the ring. Democrats also have a strong recruit in Rep. Kyrsten Sinema. 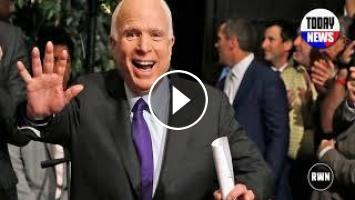 And just as we on the right were thinking we couldn’t do worse than John McCain as a U.S. Senator, along comes this little bit of news that proves us ...