Trailer: Karate in Ontario: THE UPHILL BATTLE ‘THE COST OF RAISING A CHAMPION’

Added 1 year ago by vijaykumar322705
8 Views
Synopsis
Karate and the Olympics: Who Will Represent Canada in 2020?
This documentary highlights the difficulties experienced in creating champions in Ontario. Today, money talks so loud that a person’s paying capacity can now replace talent, dedication, and perseverance. As the parent of a well-known champion stated: ‘Today, a child’s whole athletic career depends on the pockets of the athlete’s parents – whether they can pay, or not’. With Karate becoming part of the Olympics, this situation must be changed!
Every day we’re seeing athletes faced with hardships and problems created by stringent rules, underfunding, and a complete lack of understanding from ‘higher-ups’ in the fast-paced world of Karate in Ontario.
Today, Karate faces a real challenge, and that is: How do we make the transition from an amateur sport to a professionally organized industry with the appropriate environment for raising true champions?
The Uphill Battle attempts to cover this issue in depth. Now, for the first time, we go behind the scenes on the difficult journey of creating karate champions in Ontario. Canadian Karate is based on dedication and enthusiasm of the senseis, coaches, judges, athletes and their parents. Ontario is a very special case in this story.

What the Experts Say!
Kyoshi Sam Moledzki, Karatedo Shitokai Canada Shihau-WSKF – “This insightful documentary gives the viewer a behind-the-scenes look at Karate in Ontario. Many different topics are covered, and anyone interested in Karate will discover something unique and important in this story.”

Patricia Wright, Elite Athlete: “I agree the "Cost of Raising a Champion" is astronomical. Being a Champion myself and having traveled to Belgium, Romania, Ireland, Spain, Austria and LasVegas all for Tournaments in 2016.”

Oleg Morgunov, director of The Toronto Karate Junior League and karate practitioner: “after this film release in September 2016 a lot of changes have happened. In this film we are talking about tournaments for juniors which can follow them to the Olympics and in GTA area, unfortunately we still don't have enough good organized big tournaments with WKF rules even now after all those positive changes we have in Karate in Ontario since Dec-18 2016. But this film made a lot to make all these changes happened and we are proud of it!”

Watch the documentary for free at Amazon Prime: https://amzn.to/2viPzgA

Purchase your own copy of the documentary on DVD or BRD: https://www.invisionpro.com/uphill-battle-documentary/

Trailer: Karate in Ontario: THE UPHILL BATTLE ‘THE COST OF RAISING A CHAMPION’ 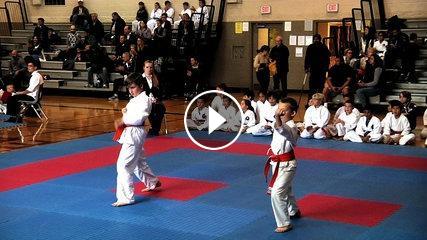 SynopsisKarate and the Olympics: Who Will Represent Canada in 2020?This documentary highlights the difficulties experienced in creating champions in O...