President Trump is being called out for emphasizing former President Obama's middle initial Friday.
During a rally speech for Senate candidate Mike Braun in Indianapolis, Trump said about Braun's Democratic opponent: "It's no surprise Joe Donnelly is holding a rally this weekend with Barack H. Obama."
The president outlined the letter H in the air as he was saying it.
He didn't comment further about Obama's middle name Hussein, but instead, went on to claim that the crowd size at Obama's rally was smaller.
Trump was notably one of the leading figures in the birther movement which questioned if Obama was actually born in the United States.
Some have linked the conspiracy theory to racist views.
Meanwhile, others have accused Trump of suggesting multiple times that Obama is Muslim.
As for the Indiana Senate race, polls show Braun and Donnelly are extremely close, with RealClearPolitics giving a slight edge to the incumbent, Donnelly. 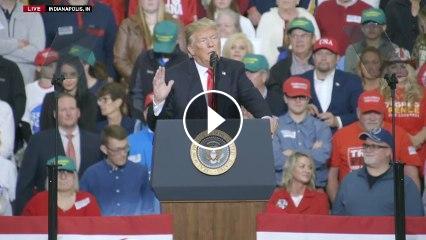