Added 7 months ago by aravindh060
9 Views
President Donald Trump is praising an ally’s call to unmask the intelligence community whistleblower whose complaint served as the catalyst for Democrats’ impeachment probe.

Speaking at a rally in Kentucky Monday, Trump says GOP Sen. Rand Paul’s call for the whistleblower to be publicly named was “excellent.”

Paul claimed at the rally that the whistleblower’s identity is known, adding, “I say to the media, do your job and print his name.”

U.S. whistleblower laws exist to protect the identities and careers of people who bring forward accusations of wrongdoing by government officials. Lawmakers in both parties have historically backed those protections.

President Donald Trump is calling incumbent Gov. Matt Bevin a “pain” on the eve of Tuesday’s Kentucky gubernatorial election, but he says he means it in the nicest way.

Addressing a campaign rally Monday in Lexington, Kentucky, Trump said Bevin has frequently prodded him to help court businesses to relocate in his state and bring federal dollars to the state.

Trump says, “He’s such a pain in the ass, but that’s what you want.”

The bitter Kentucky contest is being watched closely for early signs of how the increasingly partisan impeachment furor in Washington might affect Trump and other Republican incumbents in 2020.

Republican Gov. Matt Bevin gets to bask in the campaign finale he wanted — an election-eve appearance with President Donald Trump just hours before Kentucky voters choose between him and Democratic Attorney General Andy Beshear.

The Monday evening rally at Rupp Arena in Lexington will reinforce one of Bevin’s main themes throughout the bitter gubernatorial campaign — his alliance with Trump, whose popularity eclipses the governor’s in the Bluegrass State.

Trump tweeted support for Bevin on Monday morning, saying he “has worked really hard & done a GREAT job.” Thousands of people, many wearing Trump shirts and hats, gathered inside Rupp Arena hours before the rally.

TicToc by Bloomberg is global news for the life you lead. We are a 24/7 news network that covers breaking news, politics, technology, business and entertainment stories from around the globe, supported by a network of Bloomberg’s 2,700 journalists across 120 countries. 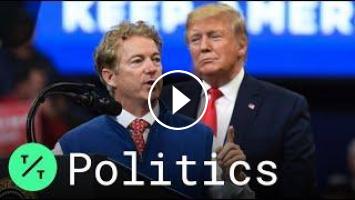 President Donald Trump is praising an ally’s call to unmask the intelligence community whistleblower whose complaint served as the catalyst for Democr...