Added 5 months ago by vijaykumar322705
44 Views
Trump has offered pardons to his minions that break the law for him. Cenk Uygur and Ana Kasparian, hosts of The Young Turks, break it down. MORE TYT: https://tyt.com/trial

"President Trump is so eager to complete hundreds of miles of border fence ahead of the 2020 presidential election that he has directed aides to fast-track billions of dollars’ worth of construction contracts, aggressively seize private land and disregard environmental rules, according to current and former officials involved with the project.

He also has told worried subordinates that he will pardon them of any potential wrongdoing should they have to break laws to get the barriers built quickly, those officials said.

Trump has repeatedly promised to complete 500 miles of fencing by the time voters go to the polls in November 2020, stirring chants of “Finish the Wall!” at his political rallies as he pushes for tighter border controls. But the U.S. Army Corps of Engineers has completed just about 60 miles of “replacement” barrier during the first 2½ years of Trump’s presidency, all of it in areas that previously had border infrastructure."

Download audio and video of the full two-hour show on-demand + the members-only postgame show by becoming a member at http://tyt.com/join/. Your membership supports the day to day operations and is vital for our continued success and growth. 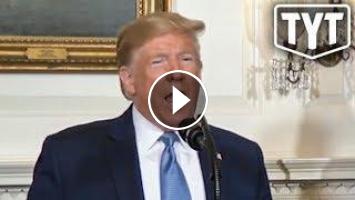 Trump has offered pardons to his minions that break the law for him. Cenk Uygur and Ana Kasparian, hosts of The Young Turks, break it down. MORE TYT: ...