Added 2 years ago by aravindh060
20 Views
► Trump just declared a trade war against Canada. Trudeau’s response is brutal
President “Deals” continues to prove day after day that he knows nothing about making, well, deals. For proof, look no further than Thursday’s stock market dip after Trump placed 25% and 10% tariffs respectively on Canadian steel and aluminum.

As our neighbor to the north, Canada has long been an ally of the United States, but years of civility between the two nations is falling apart faster than Donald Trump’s toupee in the wind.
After Trump’s disastrous announcement, Canadian Prime Minister Justin Trudeau was forced to respond – and he did so by imposing his own $16.6 billion dollar tariffs on American goods.
Deals, deals, deals.

Trudeau took the podium today and spoke both in French and English, as he is oft to do when addressing his bilingual country. By contrast, Trump can barely get through one coherent sentence in English.

“In closing, I want to be very clear on one thing,” Trudeau explained. “Americans remain our partners, our allies, and our friends. This is not about the American people,” he assured all who were listening.
It really says something when a foreign leader has more respect for a nation’s constituents than its actual leader. 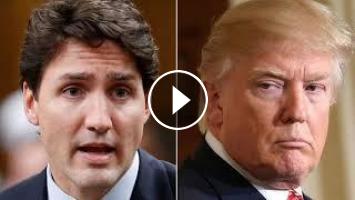