"You've endured harassment threats attacks trials imprisonment and torture. I got to know many of you and helped you get some get some of you out of the difficult situation that you are in."

Vice President Mike Pence backed up his boss... saying that as Trump pursues denuclearization and peace, the U.S. will continue to stand for the freedom of religion of all people of all faiths on the Korean Peninsula.

"And those who deny religious freedom to their own people often have few qualms denying those rights to others. That's why, under President Trump's leadership, this administration has taken decisive action to defend our first freedom at home and abroad."

Pence was speaking Thursday at a State Department conference on religious freedom... where he said the treatment of people of faith in North Korea is "much worse" than in China.
He cited an advocacy group for persecuted Christians called Open Doors,... pointing out that North Korea has been ranked as the world's worst persecutor of Christians for the past 18 years.
Kan Hyeong-woo, Arirang News 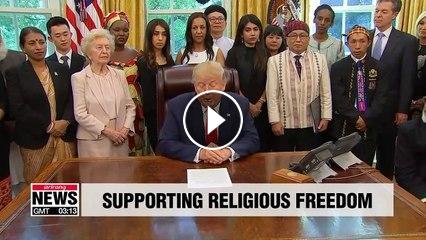 U.S. President Donald Trump is going to bring up the issue of religious persecution in North Korea to the its leader Kim Jong-un... while Trump's righ...