Republicans added to their historic 2014 gains in the nation’s state legislatures with the addition of five state House chambers and two state Senate chambers in last week’s election, while Democratic control was reduced to levels not seen since the Civil War.

Republicans are now in control of a record 67 (68 percent) of the 98 partisan state legislative chambers in the nation, more than twice the number (31) in which Democrats have a majority, according to the bipartisan National Conference of State Legislatures (NCSL).

Donald Trump's stunning victory Tuesday was nothing less than a repudiation of the Obama presidency.

"Elections have consequences," as President Obama himself said after his 2008 win. And for Obama, it's hard to imagine a more consequential outcome Tuesday night.

With Republicans maintaining control of the House and Senate, President-elect Trump would be in a position to repeal large parts of Obama's legislative agenda, repeal his executive orders with a stroke of a pen, and install conservative Supreme Court justices.

Consider the opposite scenario: Clinton's election would have ushered in a new era of American politics: The Obama era. With his former secretary of State in the White House, Obama would be able to count on on a successor who will pursue some of his most transformative and controversial policies: immigration reform, the expansion of health care and environmental regulation.

Trump has pledged to repeal every one of them.

Three years ago, when Republicans were battling President Obama over the debt ceiling and a government shutdown, the president said, “You don't like a particular policy or a particular president? Then argue for your position. Go out there and win an election.”

That is what Republicans did on Nov. 8. In addition to winning the presidential election, Republicans also maintained majorities in the House and Senate and now have 33 governorships and 32 state legislatures under GOP control. It was a consequential repudiation of the far-left policies of the Democratic Party. To paraphrase Mr. Obama: Republicans won, Democrats lost, now deal with it.

Several angry protests erupted across the country on Wednesday in the aftermath of Republican Donald Trump’s historic election victory. But one demonstration at American University in Washington, D.C., spiraled out of control. 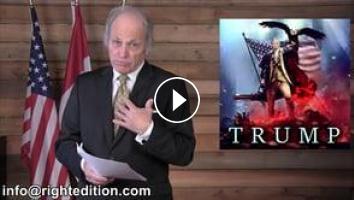