Added 2 years ago by aravindh060
9 Views
Uganda's army has made a rare apology after soldiers were caught on film beating up a journalist who was covering a demonstration supporting detained MP Bobi wine on Monday.
Other journalists were also beaten as they were reporting on the protests.an army statement described the soldiers' conduct as "unprofessional" and said they would be arrested. There has been political tension in Uganda after wine, and four opposition MPs, were arrested last week.
Wine, who was a well-known musician before being elected an independent MP last year, is leading possibly the first major popular movement against President Yoweri Museveni by young people. On Monday one person was killed and more than 100 arrested.
Last week, two journalists were arrested as they reported live from the northern town of Arua, where wine's driver was killed during a bitterly contested by-election, which was won by one of the MP’s allies, Kassiano Wadri.


KTN News is a leading 24-hour TV channel in Eastern Africa with its headquarters located along Mombasa Road, at Standard Group Centre. This is the most authoritative news channel in Kenya and beyond. 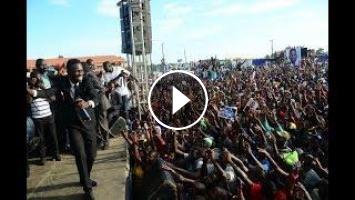 Uganda's army has made a rare apology after soldiers were caught on film beating up a journalist who was covering a demonstration supporting detained ...