U.S. Assessing Cost Of Keeping Troops In Germany As Trump Battles With Europe

Added 2 years ago by sriraj2030
10 Views
"The Pentagon is analyzing the cost and impact of a large-scale withdrawal or transfer of American troops stationed in Germany, amid growing tensions between President Trump and German Chancellor Angela Merkel, according to people familiar with the work.

The effort follows Trump’s expression of interest in removing the troops, made during a meeting earlier this year with White House and military aides, U.S. officials said. Trump was said to have been taken aback by the size of the U.S. presence, which includes about 35,000 active-duty troops, and complained that other countries were not contributing fairly to joint security or paying enough to NATO.

Word of the assessment has alarmed European officials, who are scrambling to determine whether Trump actually intends to reposition U.S. forces or whether it is merely a negotiating tactic ahead of a NATO summit in Brussels, where Trump is again likely to criticize U.S. allies for what he deems insufficient defense spending.

U.S. officials, who spoke on the condition of anonymity to comment on the unpublicized effort, emphasized that the exercise is limited to an internal exploration of options. The top military brass are not involved as yet, and the Pentagon has not been tasked with figuring out how to execute any option.

A spokesman for the National Security Council at the White House said in a statement that the NSC had not requested a Defense Department analysis of repositioning troops in Germany. But “the Pentagon continuously evaluates U.S. troop deployments,” the statement said, and such “analysis exercises” are “not out of the norm.”

Several officials suggested that Pentagon policymakers may have moved ahead with the assessment to prove the worth of the current basing arrangement and dissuade Trump from carrying the thought of withdrawal any further.

Pentagon spokesman Eric Pahon dismissed any suggestion of a full or partial withdrawal from Germany and described such analysis as routine.

“The Pentagon regularly reviews force posture and performs cost-benefit analyses,” he said in a statement. “This is nothing new.

Germany is host to the largest U.S. force presence in Europe — we remain deeply rooted in the common values and strong relationships between our countries. We remain fully committed to our NATO ally and the NATO alliance.”

Since the end of World War II, the U.S. troop presence in Germany has been viewed as a bulwark against a potential Russian invasion of Europe and a staging ground for U.S. operations in Africa and the Middle East."

U.S. Assessing Cost Of Keeping Troops In Germany As Trump Battles With Europe 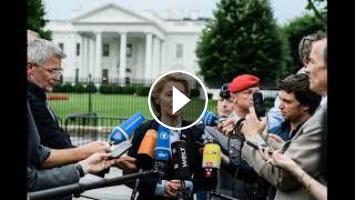 "The Pentagon is analyzing the cost and impact of a large-scale withdrawal or transfer of American troops stationed in Germany, amid growing tens...