Added 2 years ago by sriraj2030
8 Views
WASHINGTON (Reuters) - So many Washingtonians are gliding the final few blocks of their commutes on motorized scooters that a new sharing program cannot keep up with rush-hour demand. Authorities in other big U.S. cities that pioneered the concept are less than thrilled.
San Francisco’s city attorney called the vehicles a “public nuisance.”
San Francisco and Austin, the capital of Texas, say they have seized hundreds of scooters after careless customers routinely dumped them on public right of ways after their rides, blocking the path for the elderly and disabled.
Commuters have embraced scooter-sharing in the nation’s capital since it was introduced in late February. In part, the goal of the programs is to cut down on traffic congestion and the resulting air pollution by adding a so-called “last mile” commuter transportation option in urban areas.
With that in mind, the resistance that scooter-sharing programs have encountered has been a source of frustration, at least for one company official.
“I’m getting kind of bored with the illegal parking conversation, because I feel like the problems we’re trying to solve are so much bigger than that,” said Maggie Gendron, who heads strategic development at LimeBike, one of the scooter share companies participating in Washington’s pilot project.
Washington and San Francisco are regularly among 10 U.S. cities with the worst traffic, according to INRIX, a transportation analytics company.
The electric scooters have a maximum speed of 15 miles per hour, GPS and data connections. Unlike programs involving shared bicycles that typically must be left in docking stations, the scooters are dockless, leaving riders responsible for parking them out of the way.
The next rider can then locate the nearest scooter with a smartphone app, unlock it for $1 and use it for 15 cents per minute thereafter. That is, if any are available.
In San Francisco, the city attorney ordered three scooter operators - LimeBike, Bird Rides and Spin - that provide a total of 1,250 scooters to come up with plans for informing customers of the rules. Riders are prohibited from riding on sidewalks and leaving scooters in public rights of way, must wear helmets and obey other rules. Officials are now reviewing those plans.
In Austin, the city manager this week adopted emergency rules for dockless scooters, including requiring a technology that confirms they are properly parked.
The pilot program in Washington, which runs until August, is capped at 400 scooter permits. It has been so popular that there are often no vehicles left for riders seeking to locate the two-wheeled stand-up rides.
To guard against problems seen in other cities, Washington riders must agree to a digital contract that spells out rules that prohibit riding on sidewalks, mandate sticking to roadway bike lanes and proper curbing of discarded scooters, LimeBike’s Gendron said.
“We are doing what we can to hold that rider accountable and we have in-app solutions,” Gendron said. “For example, someone can report someone doing something illegal. We have an illegal parking icon in our apps.”
The Washington program’s success depends on scooter companies “working with us on sensible ways to regulate and manage the program,” Terry Owens, a spokesman for Washington’s Department of Transportation, told Reuters in an email.
Scooter operators have not revealed plans for other cities. The current list includes Los Angeles, Santa Monica, San Diego and San Jose, all in California. In Arizona, Scottsdale and Tempe have scooters, as do Nashville and Atlanta.
Writing by Barbara Goldberg in New York; Editing by Frank McGurty and Bill Berkrot 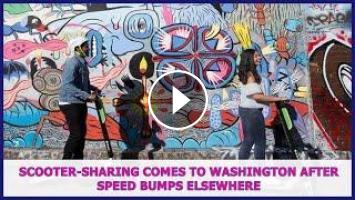 WASHINGTON (Reuters) - So many Washingtonians are gliding the final few blocks of their commutes on motorized scooters that a new sharing program cann...