What is the #Occupy Movement?: Part II Roundtable Discussion

Added 1 year ago by aravindh060
8 Views
What is the #Occupy Movement?

A series of roundtable discussions hosted by The Platypus Affiliated Society. This is the second part of the discussion series held in New York City.

The recent #Occupy protests are driven by discontent with the present state of affairs: glaring economic inequality, dead-end Democratic Party politics, and, for some, the suspicion that capitalism could never produce an equitable society. These concerns are coupled with aspirations for social transformation at an international level. For many, the protests at Wall St. and elsewhere provide an avenue to raise questions the Left has long fallen silent on:

What would it mean to challenge capitalism on a global scale? How could we begin to overcome social conditions that adversely affect every part of life? And, how could a new international radical movement address these concerns in practice?

We in the Platypus Affiliated Society ask participants and interested observers of the #Occupy movement to consider the possibility that political disagreement could lead to clarification, further development and direction. Only when we are able create an active culture of thinking and debating on the Left without it proving prematurely divisive can we begin to imagine a Leftist politics adequate to the historical possibilities of our moment. We may not know what these possibilities for transformation are. This is why we think it is imperative to create avenues of engagement that will support these efforts.

Towards this goal, Platypus will be hosting a series of roundtable discussions with organizers and participants of the #Occupy movement. These will start at campuses in New York, Chicago, Boston and Philadelphia but will be moving to other North American cities, and overseas to London, Germany, Greece, India and South Korea in the months to come. We welcome any and all who would like to be a part of this project of self-education and potential rebuilding of the Left to join us in advancing this critical moment.

Discussants were asked to consider the following questions:

1. In light of the recent series of coordinated and spectacular evictions that took place on November 15th, as well as the international Day of Action that followed two days later, is it fair to say that the #Occupy movement has entered into “phase 2”? If so, what is the nature of this new phase of the movement’s development? How has the occupation been forced to adapt to a changing set of conditions on the ground and what sorts of fresh difficulties do these new conditions pose for the occupiers? A moment of crisis can often be a moment of opportunity—what direction do you feel the movement should take in order to remain viable and relevant?

2. There are striking similarities between the Occupy movement and the 1999 anti-WTO protests in Seattle. Both began in the last year of a Democratic presidency, were spearheaded by anarchists, were motivated by discontents with neo-liberalism, and were supported by organized labor.

What, if anything, makes this movement different? How is it a departure from Seattle? What are the lessons to be learned from the defeat of the anti-globalization movement?

3. Some have characterized the #Occupy movement as sounding the tocsin for “class war” (e.g., of the 99% vs. the 1%). Others recognize the fact of dramatic inequality, and want the #Occupy movement to spearhead a set of economic reforms. Others see #Occupy as transforming something revolutionary beyond the “economic”. These perspectives point to radically different directions for this movement.

4. Some have become wary about the role of labor organizations in the #Occupy movement. Concerns point to the possibility of eventual “co-optation” into Democratic Party politics. Others worry that the “horizontal,” leaderless structure cultivated by the occupiers might be undermined by the decidedly top-down, hierarchical organization of labor unions. Certain of these collaborations, for example between the labor activists and occupiers in Oakland, have been seen as highly fruitful. Still, the broader call for a general strike that some organizers have hoped for has so far not been met.

What role should organized labor play in the #Occupy movement?

5. One division that emerged early on among the occupants concerned the need to call for demands. Some took issue with the content of the demands, arguing that if these are to be truly “representative of the 99%” they cannot assume a radical stance that would alienate a large section of the population. Others worry that demands focused on electoral reform or policy would steer the movement in a conservative direction. Some call into the question the call for demands in the first place, as these would limit — even undermine — the open-ended potential for transformation present in the #Occupy movement and could only close revolutionary possibilities.

What, if any, demands do you think this movement should be calling for? And, more importantly, what kind of social transformation would you like to see this movement give rise to?

6. What would it mean for the #Occupy movement to succeed? Can it?

Roundtable Participants
Brian Dominick has nearly 20 years' experience as an activist, organizer, and journalist. In his writing and lecturing, he has largely focused on questions of strategy and tactics for far-reaching social change. Forming and consulting alternative institutions has been a specialty of Brian's, from affinity groups to worker coops to 501(c)(3)s to international activism networks. He is a former co-founder of NewStandard News and instructor at the Z Media Institute.

Erik Van Deventer is a doctoral student at NYU in the Department of Sociology, presently working on the political economy of finance. He has been active at OWS and in the demands working group.

Hannah Appel earned her Ph.D. in the Department of Anthropology at Stanford University. With research interests in the daily life of capitalism and the private sector in Africa, in particular, Hannah's work draws on critical development studies, economic anthropology, and political economy. Her current project - Futures - is based on fourteen months of ethnographic fieldwork in the transnational oil and gas industry in Equatorial Guinea.

Nathan Schneider is an editor for Waging Nonviolence. He writes about religion, reason, and violence for publications including The Nation, The New York Times, The Boston Globe, The American Prospect, and others. He is also an editor at Killing the Buddha.

***Unless otherwise stated by the participants, their comments today do not necessarily reflect the overall opinion of their respective Working Groups.

What is the #Occupy Movement?: Part II Roundtable Discussion 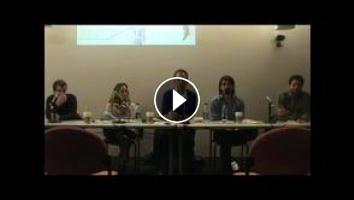 What is the #Occupy Movement? A series of roundtable discussions hosted by The Platypus Affiliated Society. This is the second part of the discussion ...